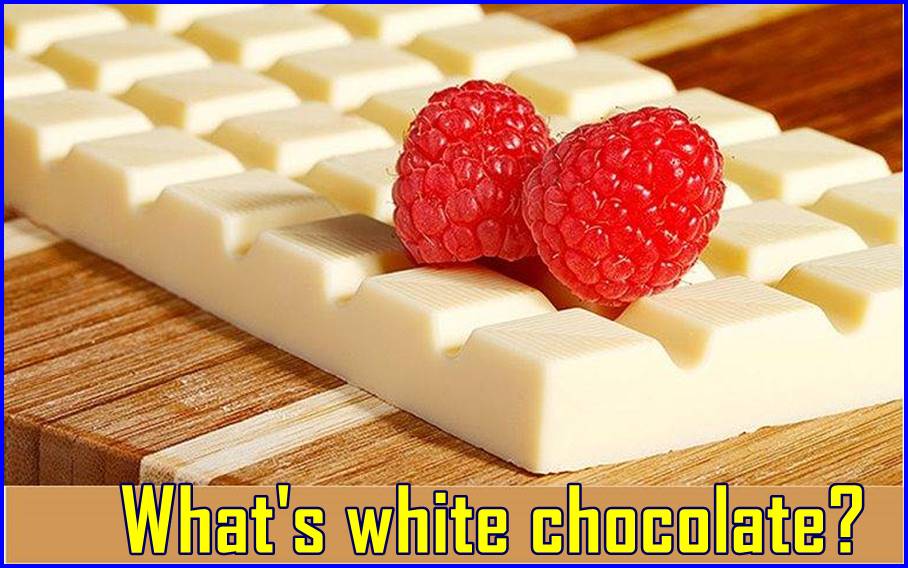 Know the differences it has with dark

White chocolate is a sweet made up of milk, cocoa butter and sugar. The cocoa butter is vegetable fat with a high melting point for the solid to keep at room temperature; this quality makes it possible to manufacture white chocolate.

As a rule, it is made up of 20% cocoa butter, 14% milk solids, 3.5% milkfat and approximately 55% sugar or other sweeteners. It is essential to clarify that it does not have cocoa among its solid components.

The Nestlé brand made it world-famous when it began to market it in 1962, with its well-known  Galak or Milkybar bars. This new flavour was a hit with chocolate lovers.

But, can it be considered chocolate? TECHNICALLY NO, it is a derivative or by-product since it does not contain cocoa mass. It is also much richer in sugars and fats. On the other hand, it will never have the beneficial properties to the body that pure cocoa has in terms of health. It is still rich in calcium because it has lots of dairy products and has a higher percentage of vitamin A.

WHITE CHOCOLATE IS ALWAYS SWEET, WHILE NORMAL CHOCOLATE IS MORE OR LESS BITTER, DEPENDING ON THE PROPORTION OF COCOA.

It should note that poor quality white chocolates are usually white and not ivory. Some manufacturers substitute cocoa butter, which gives it that more ocher hue, with other cheaper vegetable and animal fats. So please take a good look at its colour before consuming it.

It is a chocolate confection, pale ivory in color, made from cocoa butter, sugar, milk solids and sometimes vanilla. White chocolate does not contain cocoa solids, which are found in other types of chocolate, such as milk chocolate and dark chocolate. According to Wikipedia

White chocolate was initially one of the most famous cocoa by-products. This ivory-coloured treat is considered chocolate; for others, it is not. But what is the reality?

A product that contains cocoa paste and sugar is known as chocolate. White chocolate does not contain cocoa solids and makes from a mixture of cocoa butter, milk, sugar, milk fat, and lecithin. But how did this type of chocolate come about?

The story behind this

The marketing of white chocolate began at the hands of the Swiss company Nestlé in 1936, with the sale of the bars called Galak®. This chocolate quickly became popular during WWII.

The American troops consumed these products as priority foods and gave them to those affected by the war. White chocolate was considered a sweet until 2002 when the FDA established new regulations around the product.

At the request of the Chocolate Manufacturers Association, it became possible to market it as such. To achieve this, it was requested, as a regulation, that it has a minimum of 20% cocoa butter. Likewise, it must contain 14% of total milk solids and a minimum of 3.5% milkfat. It also cannot have more than 55% sugar.

Reality shows that it is. Although it does not contain this cocoa paste, it is necessary to extract cocoa butter to obtain this type of chocolate. This butter is odourless and colourless and gives all kinds of chocolate the melting property; ideal quality to cover cakes and confectionery products.

Being a product derived from cocoa made with cocoa butter, you should consider that white chocolate does not provide health benefits. Unlike dark chocolate, cocoa butter is rich in saturated fatty acids. Therefore, it recommends avoiding or moderating its consumption.

Pink chocolate became, a while ago, the fourth type of chocolate. This chocolate has exceptional flavours and is perfect for making different types of preparations. An example of this is this Matcha Financier or this Camembert and White Chocolate Pizza.

Lose the fear of using this chocolate for cooking, but of course, always with measure. Now tell us how much do you like this chocolate?

White chocolate is not chocolate: this is the explanation.

On more than one occasion, you will have seen or heard a hooligan (some even know how to make chocolate bars at home ) deny white chocolate: “that is neither chocolate nor is it anything”. Well, it turns out that he is right, and all addicts to the sweetest ‘drug’ should read this article carefully: because those rumours that you have heard that say that white chocolate is not chocolate nor does it resemble it is true, but maybe you didn’t want to believe it at all. For those of you who are deceived, we will give you the explanation quickly and painlessly.

We begin with a flashback of five centuries or so: if Columbus was in charge of discovering America, it was not until Hernán Cortés and his landing in Mexico that Europe finally came into contact with the cacao plant and, consequently, with its exploitation. The conqueror, on his return, introduced the plant and its drink to Spain under the name of chocolate.

Characterized by its intensely bitter taste, chocolate began to be industrialized in the 18th century, even leaving its two main competitors up to now in second place, precisely because of that bitterness: tea and coffee.

So we are talking about composition with common denominators since that time: butter, sugar and its main ingredient: cocoa, obtained after fermentation, drying and roasting of the cocoa bean—three essential and essential steps to get those decadent chocolates both in tablet and powder.

What about white chocolate, then? Nestlé broke the game’s rules and, in 1930, launched the legendary Galak chocolate bar, later known as Milkybar, the first known as white chocolate. Here is the kit (kat) of the question: the star ingredient in chocolate, cocoa, was replaced by milk.

Evidence supported by the US Food and Drug Administration. And if it has an aftertaste of its ‘brown brother’, it is only because the butter it makes contains the aroma of cocoa. All products classified as white chocolate since then follow a similar process.

For this reason, white chocolate is always sweet, while regular chocolate is more or less bitter, depending on the proportion of cocoa.

And now that you know the difference, eat an ounce of the colour you like best to reward yourself for going to bed knowing one more thing. But if you choose white, buddy, don’t call it chocolate because that is not it.