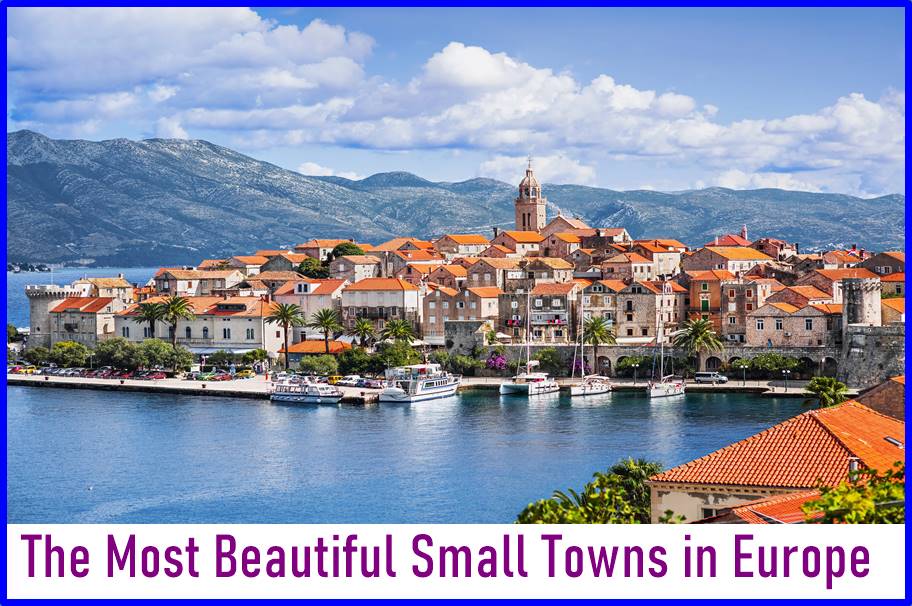 Europe, the old continent, is the object of desire of millions of tourists worldwide. Paris, Berlin, London, and Rome, some of the great capitals, have always been -and will continue to be cities that attract travelers. However, for those who aspire to conquer new horizons, the specialized travel publication Travel+Leisure launched a selection of 17 small towns to visit in European countries.

Located between Lake Zell and the Schmittenhöhe mountain, the Austrian city of Zell am See is famous for its activities: skiing and snowboarding in winter, swimming, cycling, and walking in the summer. According to Travel+Leisure, riding the Pinzgauer Lokalbahn vintage train through majestic alpine scenery at any time of year is an unforgettable experience.

Gangi is a magical little town in Palermo, Sicily. On top of a hill stands a majestic castle, medieval and baroque churches, and golden houses. Hovering over the whole is the massive Mount Etna. To escape the heat, a slightly ghoulish detour: visit the underground tomb of Chiesa Madre Gangi, where mummified priests line the crypt walls.

The picturesque city of Bled, in Slovenia, could well be taken as a scene designed by the Brothers Grimm. One of its biggest attractions is a 17th-century church located on a teardrop-shaped island in Lake Bled, which can be reached by boat.

For Travel+Leisure, Bled and its surroundings offer year-round outdoor activities, from hiking mountain trails to paddling on the lake and summer tobogganing up Straza Hill, with stunning views of the water below.

Even in southern Germany, the land of multiple cities of medieval charm, Rothenburg ob der Tauber stands out. It is a place that combines all the romantic stops in Bavaria, with turrets, stone arches, clock towers, taverns, and half-timbered buildings.

Located in the eastern reaches of Iceland, the small town of Seydisfjordur is practically hidden at the end of a spectacular fjord. Every week, its port receives a ferry connecting Iceland with Denmark and the Faroe Islands.

Although its population is only 700 inhabitants, the place has guest houses, breweries, and restaurants to receive tourists.

Located on Spain’s Costa Brava, near the French border, Cadaqués is a network of whitewashed buildings and stone alleys that slope down to a harbor dotted with boats. This a unique opportunity to admire a postcard city from many hiking trails and sunbathe alone on dream beaches. Recommendation: hire a boat to spend the day exploring the bays.

Sozopol is a city located on a slender peninsula characterized by a labyrinth of cobblestone streets and pretty red-roofed houses overlooking the turquoise sea. White sand beaches and a picturesque port are:

A protagonist of the Bulgarian and world cultural scene.

In southwestern France, Saint-Jean-de-Luz retains the spirit of a Basque Country fishing village, with half-timbered buildings in the charming old town, boats bobbing in the sheltered harbor, and picturesque architecture and golden sand that frame a scenic walk along the beach.

This small town is famous for its natural beauty and is surrounded by forests, lakes, hills, and valleys. Otepääit has long been a destination for those looking to hike, swim, and camp in the summer.

When winter arrives, the city fills with skiers, snowboarders, and other snow-loving sports enthusiasts, perhaps even Olympic medalists in training. According to Travel+Leisure, it’s worth the 15-minute drive to Sangaste, a red-brick Gothic Revival mansion modeled after Windsor Castle.

Top Towns of Europe. The Castle of Otranto

On the outer heel of Italy’s boot, Otranto, this Puglia port city has miles of glorious beaches with sparkling, sun-kissed shallow waters.

Between afternoons of swimming and snorkeling, the recommendation is to stroll through the historic center (dive inside the city’s medieval cathedral to see floor mosaics dating back to the 12th century) and take a day trip to beautiful Lecce, known as “the Florence of the south.”

The beauty of the Matterhorn, rising in the Swiss alps, will leave only sighs. This city is at the foot of the mountain, in a spectacular ski resort, the main attraction for travelers. In times of boreal summer, the recommendation is to walk and visit the highest mountain station in Europe -Trockener Steg- by cable car.

The phrase “worthy of a queen” is correct for Óbidos. For centuries, this town was presented as a wedding gift to the Portuguese queens.

The walled city on the hill still boasts the same charisma that caught the attention of Queen Elizabeth in the 13th century (leading her husband to give it to him). Wherever you go, steep stone streets wind between whitewashed houses overflowing with bougainvillea -popularly known as Santa Rita-. At the top of the city, there is the Castelo de Óbidos, well preserved and open to visits.

Brightly painted buildings, winding streets, and a baroque hilltop church, all on a small peninsula, make the old fishing port ofRovinjbe a must-see in Croatia.

Recommendation: try the freshly caught sardines from the Adriatic, the famous local truffles, and the wine made from native Istrian grapes. (It’s worth the 10-minute drive to family-run Stancija Collis for delicious Malvasia and olive oil and goat cheese.) The national park spanning the Brijuni Islands makes for an excellent day trip, with boat connections from the nearby town of Fažana.

castelsardo, with its winding streets, stunning beaches, and Bronze Age ruins, is a perfect seaside base for exploring Sardinia’s north coast.

The city of Ambleside is a gateway to England’s famous Lake District (a World Heritage Site). A green village, cozy pubs, and non-chain shops give a sense of local culture, while the 17th-century Bridge House, built over the little river, offers a postcard from the town’s past.

A walk up Loughrigg Fell is a popular way to see Lake Windermere from above, while ambitious nature lovers can circle the lake on the Windermere Way, a loop that stretches around 30 kilometers. Grizedale Forest offers more opportunities for hiking, mountain biking, horseback riding, and even ziplining through the treetops.

Top Towns of Europe. Pirgi on the Island of Chios, Greece.

PyrgiIt claims to be the city that made the xysta famous: black and white geometric designs that cover its buildings, arches, balconies, and bell towers. It is one of two dozen Aegean island mastikahoria: villages involved in mastic cultivation used to make liquors, drinks, food, and chewing gum.

Telč, a UNESCO World Heritage city located near the border of Moravia and Bohemia, is a gem in the Czech Republic.

Telč’s exquisite Old Town looks like the fantastical creation of a Hollywood set designer. Anchored by a Renaissance castle, the triangular main square stuns with caramel-colored stone houses connected by an unbroken line of delicate arches.

The Best Small Towns to Visit in the US

Minimalist decoration with style and 15 tips to decorate