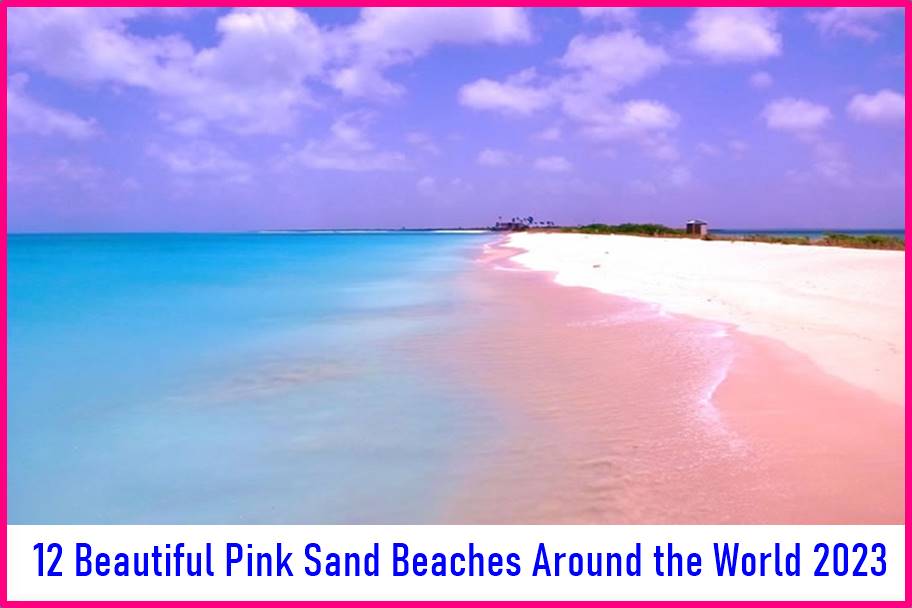 We have already established that the best beaches in the world are in Mexico. Still, around the world, there are great options with incredible landscapes and a much-needed dose of sun, sand, and sea, and some seem to be taken from a postcard from the private world of Wes Anderson.

There are some with black sand, others where you can appreciate the phenomenon of bioluminescence, and others that are even hidden underground (such as Playa Escondida in the Marietas Islands ), so having beaches where the sand is painted pink is not it’s impossible. However, it always surprises us and gives us all one more excuse to go out and travel the world (not that we need it, but it doesn’t hurt either.

Beach lovers only ask for three things from their vacations: good weather, warm waters, and a perfect spot on the sand to relax (ok, and maybe also an excellent tropical cocktail with everything and one of those little colored paper umbrellas), but that can be found everywhere, so if you want something exceptional, it’s worth doing a bit of searching and finding those places that offer something different, like a bold color that’s also going to look great in photos of vacation (or as the background of your TikTok video ).

What does Wes Anderson have to do with all this? Nothing really, just that the director showed us the power of color and symmetry, of settings that have a quirky and different touch, and although we cannot live in his films, a pink beach can convince us that we are living in one, and the adventure depends on us.

Although we can go to the beach at any time of the year, it is right now when absolutely all areas of sand and sea are filled with tourists wanting to enjoy endless sunny afternoons and sunsets and curious people who want to discover new places.

While the world is divided between sand beaches (white, golden, or even black) and stone and rocky beaches, some go one step further and look for the most exotic places in the entire geography and discover unusual places, such as pink sand beaches.

But how can it be that there are pink beaches? Usually, these beaches are more common in areas where coral abounds. The reason is that being close to coral reefs, according to experts, this element breaks down over time. With the movement of waves, sea currents, bioerosion caused by fish and other marine species, and these Coral fragments are washed ashore and deposited on the beach.

Thus, the colors of the coral and the sand merge until, as if by magic,

they find that resulting pink color so magical.

But not all pink beaches are that color because of the corals. In areas such as the beaches of the famous Bermuda Islands, the pink sand is that color for another reason. This sand is composed of eroded calcium carbonate, a type of substrate present on the seabed that, in this case, is mixed with a series of red foraminifera (a kind of algae) that ends up giving it that color.

As you can see, there is no single reason why these beaches are of such an unusual color. In our country, although there is no beach of these characteristics, the closest thing to this type of beach is a vast pink lagoon of 1,400 hectares that is part of the Lagunas de la Mata and Torrevieja Natural Park. Its color is due to the presence of a bacterium that, thanks to its high concentration of salt, dyes it that color. The bathroom, yes, is prohibited.

Unlike in these exclusive and rare spaces with pink beaches that we bring you. They are spread across all continents, although not abundant, so be prepared to travel.

Possibly this beach is the best known. If Indonesia is on your next trip, visiting Pink beach should be a ‘must’ not only because of the peculiarity of its sand but also as a paradisiacal place and different from the rest of the island’s beaches. It is located in the Komodo National Park, and the idea is that you access it with a diving team so that you do not miss the fauna that can be seen even through its crystal clear waters.

One of the attractions of this place is the famous Komodo dragon, an animal in danger of extinction since many tourists have tried to flee with one of these exotic living beings. However, it is an area declared of interest by UNESCO and has excellent protection and surveillance.

Harbor Island is best known for its beautiful pink-sand beach, located along the eastern side of the Atlantic Ocean. It almost seems endless, stretching for more than 3 miles and 50 to 100 feet wide. It is considered one of the best beaches in the Bahamas, and on occasion, it has been referred to as “The best sandy beach.

But the pink color does not come from anywhere but is due to insects living in microscopic coral, known as foraminifera, which have a bright pink or red shell filled with holes. These animals live on the bottom of reefs, like the Devil’s backbone, on seabeds, under rocks, and in caves. After the insect dies, wave action crushes the bodies and washes the remains ashore, mixing them with the sand and chunks of coral. The pink stands out more in the wet sand at the water’s edge. Again diving into this place must be very pleasing to the eyes.

This beach also owes its color to the accumulation of eroded remains of marine shells and coral debris, especially on the shore. Fine whitish sand extends throughout this place that is already overcrowded by growing tourism, and even having the occasional refreshment stall or souvenir shop significantly removes the virgin appeal of this place. The best? The contrast makes it with the turquoise blue sea clean and attractive.

Italy also has its peculiar pink sand beach; you must travel north of Sardinia to see it with your own eyes. It is Spiaggia Rosa (Pink Beach) and is very close to the Strait of Bonifacio, in the extreme north of Sardinia. As with almost everything, this beach became famous for appearing in the movie ‘ Red Desert ‘in 1964. As a result of that film, entry to the place and, of course, construction began to be prohibited.

Next to Elafonisi, Balas beach in Crete is one of the most famous on the island. It does not have the pink tone and quantity like the previous one, but it is also considered a place where you can enjoy, to a lesser extent, pink sand. Balos is on the Gramvousa peninsula, about 57 kilometers northwest of Chania, and is considered a Natural Park.

How could it be otherwise? The Caribbean also has its peculiar pink sand beach. It is a long beach located south of the airport near the old slave cabins, facing the Cargill salt flats. Like the rest of the pink sand beaches, the shore of this place is pink due to the remains of crustaceans that wash ashore, hence the name Pink Beach.

In addition, this color is strongly attenuated closer to the sea. In 1999 a strong storm almost destroyed this beautiful beach, and much of the pink sand had to be replaced by coral sand. The storm also affected the nearby coral reef, which washed deposits of sand onto it. Still, diving here is one of the best things you can do.

Unlike the rest of the pink beaches, this one in Crete does not have easy access. Of course, once you step on its sand, you will see that the effort has been worth it. It is 82 kilometers from Chania, a city you have to visit, yes or yes if you visit Crete, and this beach with turquoise waters is not what it seems.

Although it is in the middle of the Mediterranean, apparently its water is completely frozen, so it will cost more than usual to dive Elafonisi is a small islet connected to the island by a shallow reef, which, if you are lucky. The tide is low; you can cross on foot without any problems.

It is one of the most famous islands in the Philippines, with more than 7,000 islands. The Big Santa Cruz Island has one of the world’s most beautiful pink sand beaches. It is possible thanks to the coral reefs, as in the other beaches mentioned above.

This place is located in Zamboanga City, and the pink beach is combined with the blue and green tones of the sea. Some parts of the beach are charming in their almost original state, as there are few signs of civilization.

This beach is located in the southeast of Lombok, an island very close to Bali. Its proximity to coral reefs makes it one of the most famous in the area, and visited by tourists. A piece of advice: the ideal time to visit is sunrise.

This beach is located in Barbuda (an island that forms a Caribbean country with Antigua), a country still little explored by tourists. So it is the perfect place for those looking for an exceptional destination.

It is one of the best beaches in Barbados, and its sand is a beautiful pale pink that contrasts with the turquoise water. It is located right next to a Resort, the Crane Resort, of pure luxury.

The Pfeiffer Beach beach is located in the Pfeiffer State Park, a natural space in the south of the state of California where cliffs and giant rocks reign. Although bathing is not highly recommended, the currents are too strong, and it is a perfect place to take photos or climb. Its almost garnet color is due to manganese deposits.