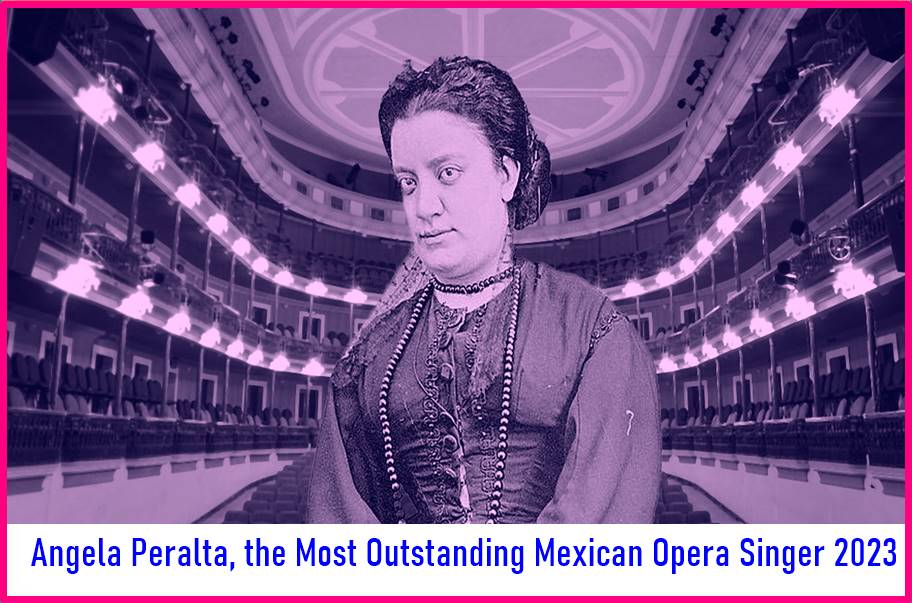 Shortly after, the singer who would later become known as “the Mexican nightingale” began a grand tour of Europe (accompanied by her father) that would last from 1862 to 1865, and which led her to perform in cities such as Cádiz, Madrid, Milan, Rome, Turin, Florence, Bologna, Lisbon, Alexandria, Genoa, Naples, Saint Petersburg, Barcelona, and Cairo, among many others.

The fame of this great singer and her taste for opera earned her the nickname “angelica di voce e di nome” (“angelic in voice and name”) in Italy. In 1865, the then Emperor of Mexico, Maximilian I, invited her to return to the country to perform at the Imperial Theater.

Thus, Ella Peralta became the favorite singer of Empress Carlota, who baptized her as the “chamber singer of the Empire.” From this moment on, Ella Peralta gave numerous concerts for the imperial government, earning the enmity of intellectuals and artists such as the writer Ignacio Manuel Altamirano.

Before the fall of the Maximilian regime, Ángela Peralta returned to Europe and married her first cousin, who, shortly after and amid his wife’s hectic working life, had to be admitted to a psychiatric hospital in Paris, where he would die. One year later. Regarding the personal life of the diva, it is also known that she fell in love with the administrator of her company. This relationship earned her judgment from the public and society on more than one occasion.

Life, success, and decline of the ugliest face and the most beautiful voice of the nineteenth century

They called her “The Mexican Nightingale.” She was the first soprano from her country to perform at the Scala in Milan, with a resounding success that brought her before kings and emperors of her time.

Ángela Peralta was “a pleasant presence” but ugly. The journalists of her time described her as a “full-bodied” woman with a “round face,” short in stature, with her head almost touching her shoulders, a large mouth, a pointed nose, and ” bulging but vivacious eyes. “although almost useless because it was myopic.

At birth, in 1845, she received the name of María de Los Ángeles Manuela Tranquilina Cirila Efrena Peralta Castera and had her voice as her only gift. At 17, she became the first Mexican soprano to appear at the Scala in Milan to perform “Lucía de Lammermoor ” by Gaetano Donizetti, and she was a success. She was called ” El Ruiseñor Mexicano,” a legend of opera in Mexico, for her early success and her troubled life that she ended because of a yellow fever epidemic.

She was a girl from a humble family who “received piano lessons at a teacher’s house in the city. Since she could not continue her studies at home because she did not have the instrument, she improvised a keyboard on the edge of a table. , immobile and new keyboard, but on which he could exercise his fingers”, wrote the French magazine El Echo de Both Mundos on April 22, 1874.

In addition to playing the piano and composing since childhood, he liked poetry, literature, and history. Before he was 15, he had already mastered French and Italian, which is essential for an opera singer.

At only eight years old, he performed before a private audience a cavatina (short made from an aria) from the opera Belisario o by Donizetti. In those days, the prima donna Enriqueta Sontag was on tour in Mexico. A rumor reached her that there was a girl who imitated her very well; she invited her to her hotel and, upon hearing her, praised her, gave her a piece of music, and told her:

“if your father took you to Italy, you would be one of the greatest European singers, “ Agustín F. Cuenca in his book Ángela Peralta de Castera. Biographical features. Perhaps Sontag would have promoted Peralta’s career, but a couple of days later, she died in Mexico City, infected with cholera, during a walk through the fair in the town of Tlalpan.

Angela had to wait a few years to travel to Europe. But in Mexico, at the age of 15, she was already part of the cast that in 1860 appeared at the then National Theater of Mexico City to play the role of Leonor in El Trovador by Verdi, which had José Zorrilla as a theater director.

Author of Don Juan Tenorio. She was just a young woman who had recently graduated from the National Conservatory, receiving private classes from a famous teacher in Mexico named Agustín Balderas, whom history recognizes as the hand that shaped the tremendous voice of Angela Peralta.

The young soprano dazzled, and of that presentation, the press of the time wrote: “She shed abundant tears of pleasure to find herself so ardently applauded.” The July 22, 1860 issue of the magazine La Sociedad praised her voice “with a delicate and sympathetic timbre, quite extensive and, above all, homogeneous” and predicted for her a “future so brilliant, since being very young, she already reaches a rare merit.”

The poor girl who came to the Italian court

Her success at the National Theater encouraged her father to take her to Spain with his resources and accompanied the teacher, Balderas. For the customs of the time, her family must have been very particular because, in the Peralta Castera couple, they both work: the mother as a teacher and the father as an employee in an office. It is how they paid for the singing classes that Angela Peralta received from the teacher Francesco Lamperti in Milan, Italy.

By then, a Spanish music critic with the surname Esquivel, who had seen her in a Cádiz theater in 1861, had already imposed his definitive label on her when he wrote: ” From now on we predict that your name will not be known, because wherever you want who goes, they will not know him for any other than the Mexican Nightingale.

Peralta traveled throughout Europe for five years, performing on the best opera stages. But without a doubt, her most resounding success was in 1862 at the Scala in Milan – which she called “The Temple of Lyric” – when she interpreted “Lucía de Lammermoor.” They say the public went crazy for her and that even a son of Donizetti, crying for her, approached her to celebrate her voice and lament that her father did not live to hear it

Her interpretation had such an echo that King Victor Emmanuel II of Italy invited her to sing for him and his wife and a packed audience of celebrities of the time who came to the Turin theater to see her perform La Sonámbula by Vincenzo Bellini. “The applause of the audience was impetuous; the entire theater shook while the public acclaimed her frantically, so she had to leave 32 times! To receive the rousing ovations”, she narrates Valladolid.

From then on, his voice toured Italy’s critical stages and traveled through Lisbon, Paris, Spain, Russia, and even Egypt. And from there, he jumped to New York and Havana. Between 1863 and 1864, he became “the figure” of the most critical opera seasons in the world.

The singer of the ephemeral Empire

Angela Peralta returned to Mexico in 1865. The country was then a tinderbox. It was invaded by the French, disputed by liberals and conservatives, and divided between those who supported the itinerant republican government of Benito Juárez, who fled across the country aboard a chariot, and those who supported the “invading” Empire of Maximilian of Habsburg, Archduke from Austria.

Oblivious to the political confrontation, the young 20-year-old soprano had received an invitation from Maximiliano and his wife Carlota to sing at the Imperial Theater (which was the National Theater where she had triumphed for the first time in Mexico). The emperor was unable to attend but sent him a letter that was read in front of the public by Celestino Negrete, who held the position of the first secretary of ceremonies of the Empire.

In her text, Maximiliano apologized for not attending her concert, gave her a set of diamonds, and awarded her the “Chamber Singer of the Empire.” With that title, she made presentations in Guanajuato, León, and San Francisco del Rincón. In Guadalajara, she inaugurated the then Juan Ruiz de Alarcón Theater, which today bears the name of Teatro Degollado.

The emperor’s attention, however, brought him the hatred of the liberals fighting to restore Mexico to its republican government. “All the freshness of the laurels that Ángela Peralta had brought from Europe withered sadly, shamefully, before the acceptance of that appointment of a buffoonish and disgraceful court,” wrote Ignacio Manuel Altamirano, a prominent politician, intellectual, and journalist of the time.

Angela Peralta returned to Spain in 1866, before the last gasp of Maximilian’s imperial regime. There she married her first cousin, the writer Eugenio Castera. He freaked out as He continued her triumphs in Europe and Mexico. Finally, she had to commit him to a psychiatric hospital in Paris, where she died in 1967.

A year later, she returned to Mexico, where word had spread of her affair with Julián Montiel y Duarte, administrator of her company. The morality of the time did not forgive her that this relationship began before her husband died, and the Mexican public turned its back on her.

During her presentations, the public booed her, insulted her, and little by little left her alone on stage after offering what many consider her best performance when interpreting Verdi’s Aida at the Gran Teatro Nacional.

Social punishment brought her to the brink of bankruptcy. She was sick and exhausted, forced to appear in small-town theaters, and suspended her career for three years. She returned to the stage in 1883 with a company of 80 people, most Italians, with whom she traveled to the city of Mazatlan, where people once again received her as a diva.

According to the chronicles of the time, the port council “decorated” the dock, received her with the National Anthem, and took her in a “beautiful carriage” to the hotel.

But a few days before his arrival, a ship had arrived at the port carrying an American who had died of yellow fever on the voyage. Despite this, the authorities allowed the crew to disembark the body and bury it in the municipal vault. An epidemic spread and reached almost the entire company that traveled with Peralta: of its 80 members, only six survived after presenting Verdi’s El trovador in an almost empty theater.

Angela also fell ill, and her last wish was to marry her lover Don Julián in Texto Mortis, that is, on her deathbed.

From this last chapter of her life, there is testimony that a man named Lemus held her from behind while the judge married her. They say that she was already dead when she said yes. The nightingale’s voice died out on August 30, 1883.