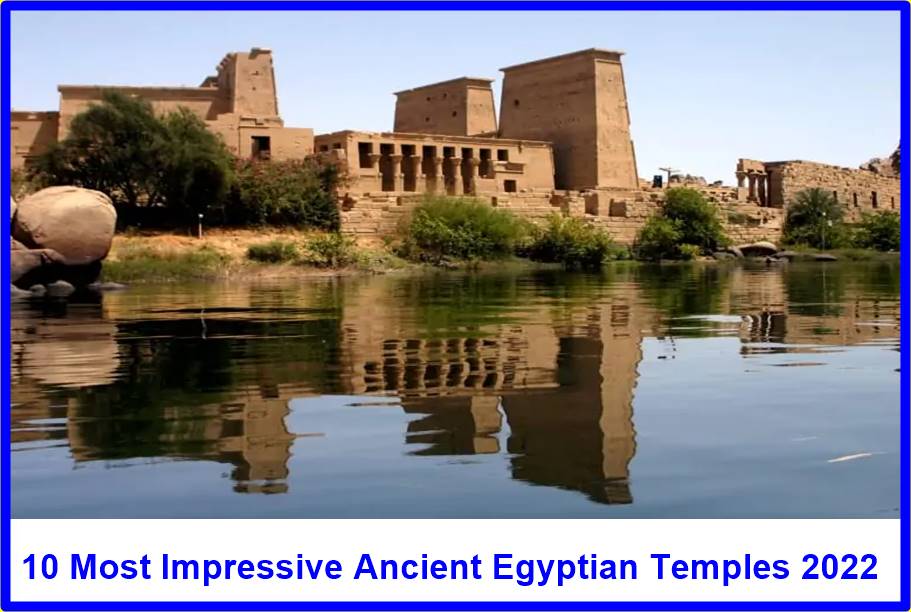 Culture and history enthusiasts get their money’s worth on a trip to cultural Upper Egypt. One of the reasons is the countless preserved Egyptian temple buildings of high culture, which have already captivated numerous travelers.

Egypt is a country whose advanced civilization has produced these fascinating buildings that captivate us daily with each visit. Hardly in any other country can you marvel at many fascinating monuments in such a small space as Egypt.

What is the difference between a temple, a tomb, and a pyramid?

A tomb is a place where a person was buried in Ancient Egypt, and the types of tombs varied throughout the different kingdoms: they evolved from mastabas to pyramids (yes, pyramids are tombs), through underground chambers, as in the Valley of the Kings.

What is an Ancient Egyptian temple?

A temple was an official place of worship dedicated to a god (or gods) or a pharaoh. In the temples dedicated to the gods, priests performed rituals, and people left offerings, all to maintain maat, which was divine peace and order and on which the religion of Ancient Egypt was built. The mortuary temples of the pharaohs were memorials to keep their spirit in the afterlife.

It’s a somewhat simple explanation, but we don’t want to lose you before we get to the juiciest part: the Egyptian temples themselves:

The Karnak temple complex is the largest religious building ever built, and it was for 2,000 years. Construction began in the Old Kingdom and was continually expanded until the Ptolemaic era, with the contribution of approximately 30 different pharaohs.

Located near Luxor, this unique temple covers an area of ​​123 hectares. It served as the venue for countless festivals in the Egyptian Empire, such as the Opet Festival, held once a year.

Strictly speaking, the Temple of Karnak, or District of Amun, as it is also known, is a structure whose completion several pharaohs participated in.

But also in the east of the district of Amón Tutmosis III entered the action. Here he built a building with a rather unusual silhouette.

Also, in the east, Ramses II built the Shrine of the Rising Sun, in the center of which was the vast obelisk of Thutmose III.

It is the second most visited place in Egypt after the Pyramids of Giza. It also houses the open-air Karnak Museum.

Abu Simbel comprises two substantial rock temples, about 3 hours from Aswan. The twin temples were built in the 19th Dynasty of the New Kingdom as an enduring monument to Ramses II and his Great Royal Wife, Nefertari.

These two rock-cut temples represent the highlights of the architecture of the reign of Ramses II. The largest temple is dedicated to the gods Amun-Re, Horus, Ptah, and the deified Ramses.

Especially famous are the two 22-meter-high colossal statues of Ramses II. This temple was already heavily damaged by an earthquake when Ramses II ruled the empire and had to be extensively repaired.

The massive temples were moved from their original location in an international effort to save the ancient monuments from the flooding of the Nile and are one of 7 Egyptian UNESCO World Heritage Sites.

Abu Simbel, a temple complex that could not better represent the greatness of Ramses II, is one of Egypt’s most fantastic attractions.

It may interest you: 10 places to see the Northern Lights

In one of the most famous cities of Egypt, Luxor, this temple is located not far from the Nile. Especially notable is the 2.5 km long Sphinx Alley, which connects Luxor temple with Karnak.

Built around 1400 BC (over 3,400 years ago), Luxor Temple differs from most other ancient Egyptian temples in that it was not built to worship a particular god or pharaoh.

Thus, this temple is also associated with the Opet Festival, part of the Egyptian tradition. Luxor Temple is considered quite unusual compared to the other temples in Egypt because it has an exceptional orientation north towards Karnak Temple. Its decoration has unique features.

Several pharaohs also seem to have been involved in constructing the Luxor temple, as the temple house is from the Middle Kingdom period, the Thutmosidenzeit, the colonnaded courtyard, and the two obelisks are from the time of Ramses II. With the discovery of the Luxor temple, 21 statues of pharaohs and gods were found. Today they are in the Luxor Museum.

It was primarily used as a place where pharaohs were crowned, sometimes even conceptually (for example, Alexander the Great claimed he was crowned there, but there is no evidence that he was there).

During medieval times, the Muslim community was built on the site of the Luxor Temple, and to this day, a functional mosque remains a part of the temple complex.

4. Temple of Seti I in Abydos

The Temple of Seti I is one of the most impressive temples in Abydos, an ancient holy city located in the modern Egyptian governorate of Sohag.

It was built as a monument to Seti I, a pharaoh of the New Kingdom, and is famous as the place where the “King List of Abydos” was carved; it is a chronological list of pharaohs (which Seti recognized), starting with Narmer/Mena, the first Egyptian pharaoh, up to Ramses I (Seti’s father).

The Ramessum is the mortuary temple of Ramses II (the same pharaoh who built Abu Simbel and son of Seti I).

It was built with the intention of being a place of worship after the death of Ramses II so that his memory would remain alive; this was of paramount importance in the religion of Ancient Egypt.

However, Hatshepsut’s temple is the show’s star, and a sheer cliff surrounds the massive terraced monument. On this cliff, archaeologists found a cache of royal mummies, moved in ancient times from the Valley of the Kings.

7. The Temple of Ramses III at Medinet Habu

Ramses III is considered the last mighty pharaoh of the New Kingdom, and his mortuary temple dominates the Medinet Habu archaeological site in Luxor.

The temple is primarily known for the representations of Ramses III defeating the “Peoples of the Sea,” invaders from Ancient Egypt whose origin is unknown.

Kom Ombo, an hour’s drive from central Aswan, is an unusual double temple dating from Ptolemaic times. A “double” temple means that it has two sets of halls, shrines, and rooms dedicated to two different gods; in the case of Kom Ombo, the two gods were Sobek (the crocodile god) and Horus (the falcon god).

Horus, in particular, was an important god in the early mythology of Ancient Egypt. Horus was originally a god of the sky, but he also became the god-king, god of the world, or god of light.

Also, Horus was the protector of children. In the Middle Kingdom, Horus became the god of the first and eleventh gau of Upper Egypt. Horus is usually depicted as a falcon.

More than 300 crocodile mummies were found here and are now housed in the adjacent Crocodile Museum.

Kom Ombo also has engravings of what is believed to be the world’s earliest depiction of medical tools and surgical instruments.

If archaeologists’ assumptions are followed, Kom Ombo was built in several stages. Kom Ombo was excavated in 1893 under the direction of J. de Morgan.

9. Temple of Horus in Edfu

Built-in Ptolemaic times, the Temple of Horus at Edfu (or Temple of Edfu) is one of the best-preserved temples in all of Egypt. It is also the largest temple dedicated to Horus.

The wall inscriptions have provided archaeologists with important information about the religion and language of Ancient Egypt during the Hellenistic/Ptolemaic era.

10. Temple of Khnum at Esna

Khnum was the ram-headed Egyptian god who created the world on his potter’s wheel, and this temple dedicated to him was built in Ptolemaic times but enlarged by the Romans.

Because it was such a deeply religious place, inscriptions on the temple walls instruct visitors to enter to have their fingernails and toenails clipped, wear bedding, remove body hair, wash their hands with natron (a type of salt), and not have had sex for several days (makes today’s places of worship look like a walk in the park)

11. Temple of Hathor at Dendera

Known for its still stunning blueness more than 2,000 years later, the Temple of Hathor is the most impressive site in the Dendera temple complex.

Built in the Ptolemaic era, it shows Egyptian, Greek, and Roman influences and has several shrines to different gods. It is also known for the explicit representations of Cleopatra and her son Caesarion, fathered by Julius Caesar.

Probably in no other country in the world are there many such temples in such a small area as in Egypt. Most Egyptian temples date from the New Kingdom or the Ptolemaic period. The Sun Shrine of Abu Gurob, created by King Niuserre, is well known in the Old Kingdom.

More information about temples in Egypt

Hip Abductor Machine Is It Worth Using?

How do I check the balance of a Walmart gift card?

How to get water out of the ear?

How to cancel Planet Fitness membership?